DESPERATION DOES NOT LOOK GOOD ON ANYONE 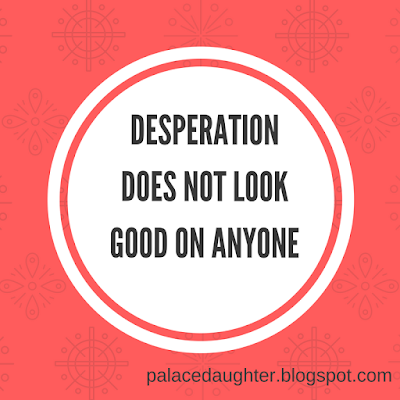 I am going to be very frank here. So let me start by advising ladies not to get married because of family pressure, age or for the reason that they are interested in pleasing people. Many women are victims of abuse (emotional, physical, sexual…) today because they married for the wrong reasons. These past few days I stumbled on few stories of women who did stupid things all in the name of wanting to get married. When I read these stories and watched the video clip, I was hurt. The first story was about a lady who knew a man was married and still went ahead to plan a wedding with him. They had even printed the wedding invitation card without the approval of their pastor. The desperation on the face of the lady was so overwhelming and from the story, it was like the man sent his first wife to another country to engage in sex trafficking, all in the name of money.
SEE ALSO:HOW TO EARN A VALUABLE RELATIONSHIP WITH THE RIGHT MAN
In the second story, a lady complained of abuse in her marriage. Fast forward to few days to her wedding, she perceived she would encounter challenges, having observed some things about the man in the short time of contact though the relationship was a long distance one. She never wanted to cancel the wedding because of what people would say. She ignored the fact that a broken relationship is better than a broken marriage or a hell in marriage. No excuse is tenable for abuse. If you are getting married because of family pressure even though you are not ready, remember that a wedding takes place in a day and marriage is for a lifetime. Remember that those who put pressure on you to get married will not endure what you will have to endure in marriage. Again, if you are in an abusive relationship, it’s not too late to have a rethink. There is someone out there who will cherish you and treat you like an egg. It’s not how far but how well. Marriage is not a competition; it is the journey of a lifetime. Do not be desperate because desperation paints a fake picture in order to deprive you of the beauty of the real image.
I will conclude with these quotes by Henry David Thoreau and Toni Payne respectively. “It is a characteristic of wisdom not to do desperate things”. “Never let desperation force you to consider options you ordinarily would not consider”.

For advert placement or inquiries, kindly send a message or call